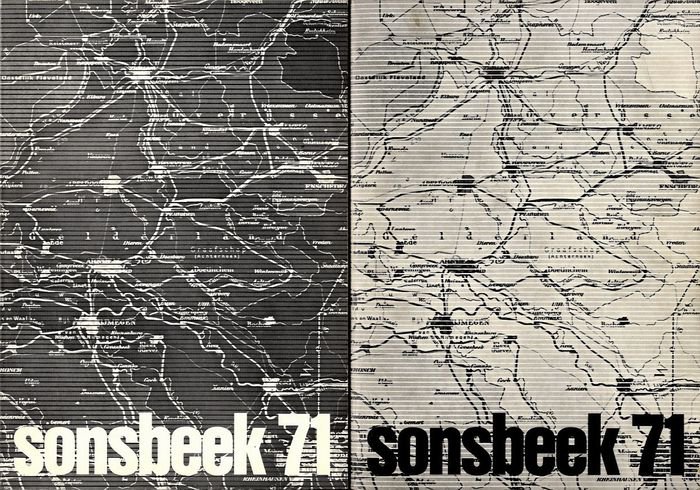 Sonsbeek 1971: sonsbeek Buiten de Perken (sonsbeek Beyond the Boundaries) was a radical break with the tradition of its predecessors. It attracted international attention: never before were the latest developments of Conceptual Art, Minimal Art, Land Art and Performance Art brought together on this scale. For the first time the exhibition worked with a theme, spatial relations, and a curator, Wim Beeren.

Artists were invited to create an artwork based on their visit to Sonsbeek Park. Most artists did visit the park, and some (including Robert Smithson) criticized its "artificial" nature. The working committee, led by curator Wim Beeren, therefore decided to give some artists the choice to go "beyond the boundaries" of Sonsbeek Park. In consultation with other locations outside the park, throughout the whole of the Netherlands, were selected. This resulted in a wide variety of different projects and artworks.

Another goal was to make visitors aware of the influence of (new) communication technologies, such as the telephone and the telex machine, on the perception of space, distance and time. As a result, special communication centres were set up in Arnhem, Maastricht, Leiden, Rotterdam, Groningen and Enschede, where visitors were given the opportunity to use these devices. In the communication centre in Sonsbeek Park, a video studio and discussion hall were installed.

Especially due to the use of installations and audio-visual equipment, the exhibition strongly deviated from the previous ones. The concept of sonsbeek '71, which was described in the catalogue as an adventure and a dynamic manifestation, was both revolutionary and controversial. Visitors, but also art critics and even some artists themselves criticized the spreading out of the artworks and the subsidization of "elitist art", a qualification which circulated in the media. Although sonsbeek '71 aimed to bring art closer to the public, it seemed to demonstrate and even increase the distance between the public and art and art experts. With 17.000 visitors the attendance was disappointing. Nevertheless the 1971 edition, is still regarded as one of the most revolutionary contemporary art exhibitions ever.