Celles qui nettoient le monde ... Those who clean up the world

This series of paintings witness a slice of domestic workers’ lives to evoke universal concerns about the role of women in the society and reproductive labour.

The story of domestic women as written by Alida Ymele in her paintings is inspired by the daily life of many of them such as Anna, a black (probably) woman from the Vossenburg plantation in Suriname, born in slavery, who came to Arnhem in 1727 to work as a caretaker for the De Vree and Brantsen and families, living with the latter until her death on 22 December 1780. Her full name, origins and story remain a mystery but her existence is a fact.

Ymele fills the faces and bodies with bag designs that show the architecture of the houses in which these women work and the stripes of Ghana must go bags anchored in forced migration due to economic or political crises. Controversy between Nigerians and Ghanaians made the bag the symbol of displacement due to ease of packaging and holding capacity. For the artist the intricate weave and texture represents the difficulties encountered by these women for whom individual stories never intertwine with global ones towards a collective memory. For centuries they have helped in castles, houses, offices – many left homes where they had a name for another where they had none.

Two of Ymele’s ongoing series Grey Women and Shadow Women pay homage to these invisibilised heroines featuring women’s bodies performing household chores in their working environments, highlighting the beauty of washing, cleaning, polishing, dusting and sweeping as essential aspects of life dismissed due to low monetarily value. The colourful portraits create tension between fragility and fierceness: the physical strength of some of the women is portrayed alongside how tiring and depressive the work can be especially with poor labour conditions.

In Ymele’s scenes architecture sometimes absorbs the bodies, demonstrating how domestic work takes up most of their personal time. In Cameroon, for instance, women with their own families work ten hours a day and cannot even afford the privilege of paying rent. Ymele’s own family’s status has been viewed as subordinate due to her mother being at home and her dad a farmer. Her works explore belonging and non-belonging in this domestic sphere and the women we tend to forget, minimising the power and importance of their labour to keep them in the shadows. Yet without these women who ‘clean the world’ as Françoise Vergés writes in Un féminisme décolonial (2019), underpaid and at risk to their own health, the state, army, cultural, artistic and scientific institutions could not occupy their offices.

Alida Ymele (1994, Dschang) is an artist who lives and works in Douala. Ymele graduated in 2019 with a professional Master in Fine Arts from Institute of Fine Arts Nkongsamba, University of Douala. Her artistic practice explores precariousness, the fragility of the human being and the socio-professional universe of the daily life of domestic women and their difficulties integrating into current societies. She expresses herself through her self-portraits, staging herself in photographs and images of women that she selects online. Ymele has participated among others in the group exhibitions including: Artuelles interferences, Galerie Annie Kadji, Douala, 2020; New Spirit 2, Paradise, Douala, 2019; and Woman Power, Bandjoun Station, Cameroon, 2018. 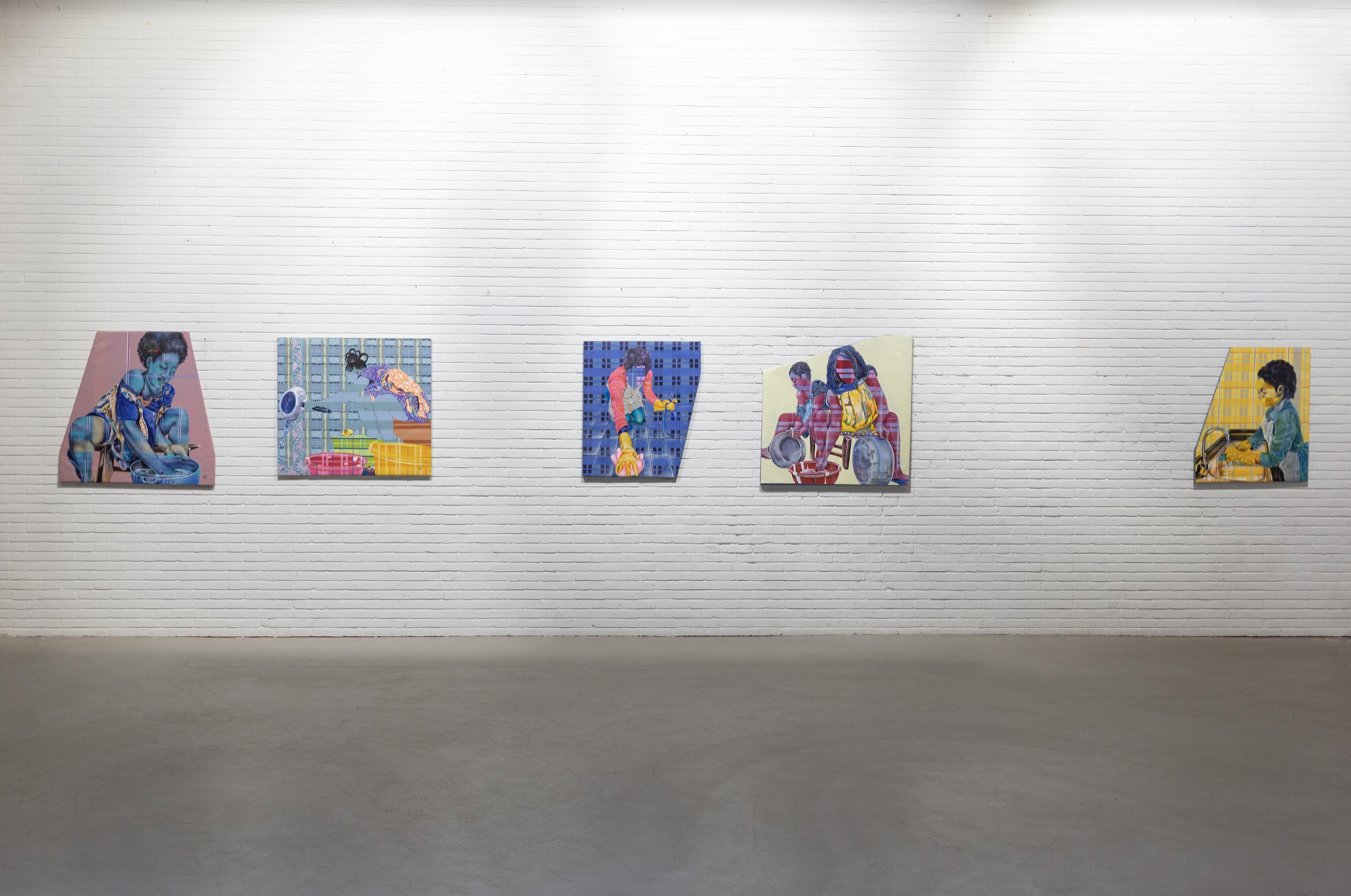 Wash-Wash (Shadow Women series), 2020 Acrylic and posca on canvas, courtesy of the artist