A Journey of A Tea Leaf

Nader Mohamed Saadallah’s documentary film focuses on metal casting. Once a traditional craft in Egypt, its practice has almost disappeared. The film depicts the daily practice of metalworking in detail, elaborating on the different phases of the craft: collecting the metal scraps, tossing and turning these scraps in the furnace, filling the molten metal into shapes and patterns before it reaches its desired final shape.

The physically demanding profession requires long hours and working with furnaces whose temperatures soar above 1.000 degrees Celsius. Saadallah matches the visual dramatics of melting metal with the many different sounds that fill the cramped workshops. Skilled labourers are the subject of the film and they narrate their craft and labour as Saadallah invites them to come closer, revealing their own perception of the labour and associated hardships. Passed from generation to generation, the craft comes not only with tradition and knowledge, but also with responsibility and pressure.

The enclosed workshops and the ritual of metal casting reflect a forgotten labour practice, a fixed process that repeats itself while the world moves in different directions. This sense of ending is present in the background, perhaps captured best when children enter the workshops to help, their youthful presence contrasting with the faces and bodies of their older family members covered in smut.

Saadallah’s second contribution is a documentary that again explores this subject of craft, physical labour, skill and repetition, focusing on the art and practice of calligraphy. Saadallah’s main subject is Hakim, a calligrapher in Alexandria who astonishingly practises his craft without hands. In spite of his impediment, he survives. The documentary also carries the sense of an ending, as calligraphy loses ground against the development of technology and digital advertising and will inevitably turn into a forgotten profession.

Saadallah’s third documentary is situated in Sri Lanka, and focuses on the country’s tea production. It highlights one particular tea estate by the name of Bluefield, once owned by the British but, after colonial rule, was left abandoned. The current owners of the estate were able to buy the estate for a low price and over time brought it back to life, with over 300 employees. Saadallah focuses on the production process, from growing to harvesting, steaming and drying, a communal process done by men and women on land and in the factory. While the other documentaries are processes of making memories to outrun the risk of being forgotten, the third manifests itself as a testament to revival.

Nader Mohamed Saadallah (1984, Alexandria, Egypt) is a photographer, videographer and documentary film director who lives and works in Alexandria. His postgraduate thesis focused on the image in theatre and in video art. Saadallah’s photography shows intimacy with his subject matter as well as spontaneity, while possessing cinematic dynamic qualities. He has participated in over 90 photography exhibitions and his photos are published in numerous magazines, websites and other platforms including National Geographic and Smithsonian Magazine. He has received countless awards and honours in the field of photography throughout the world.

This work is presented in collaboration with Museum Arnhem. 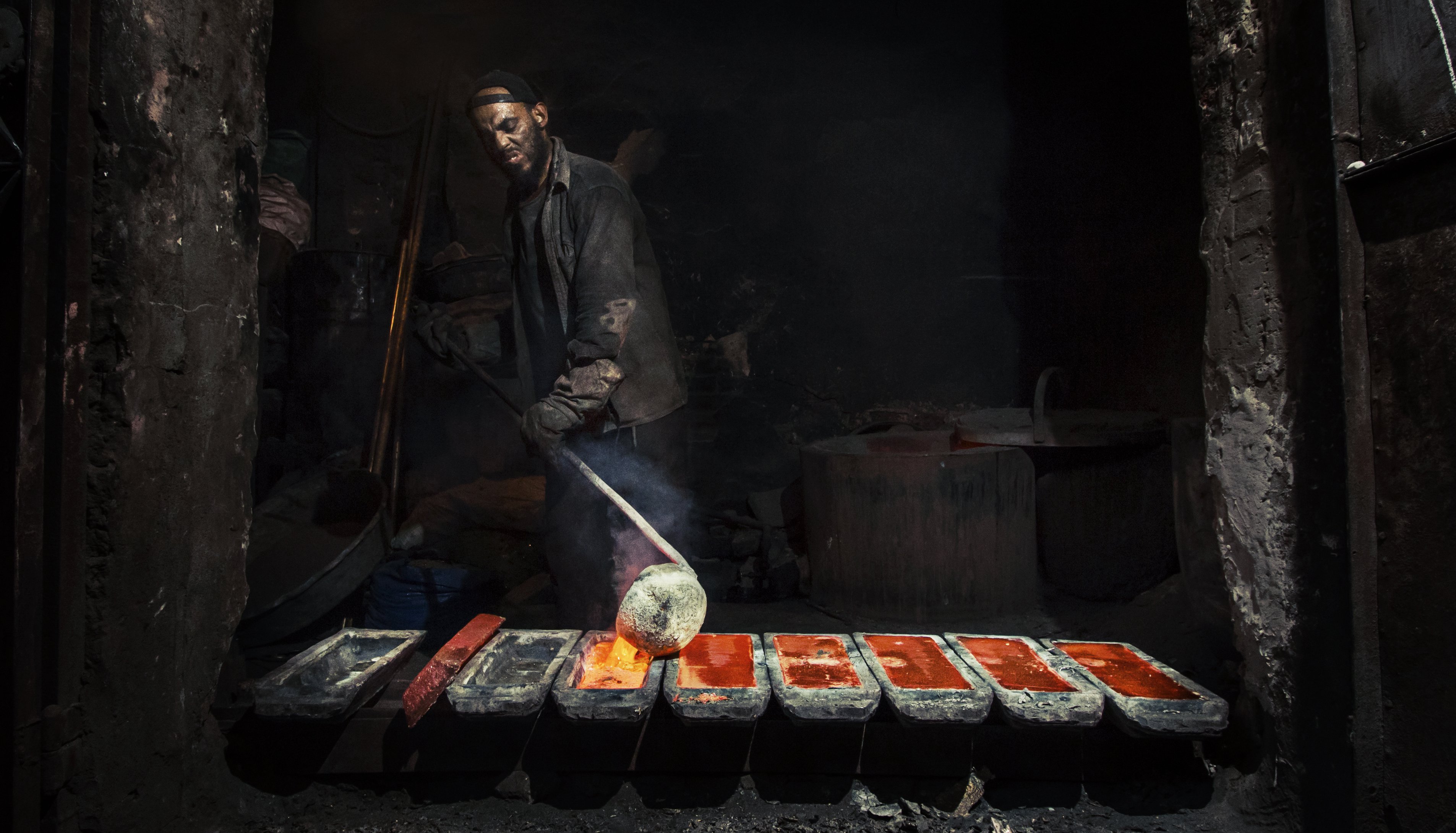 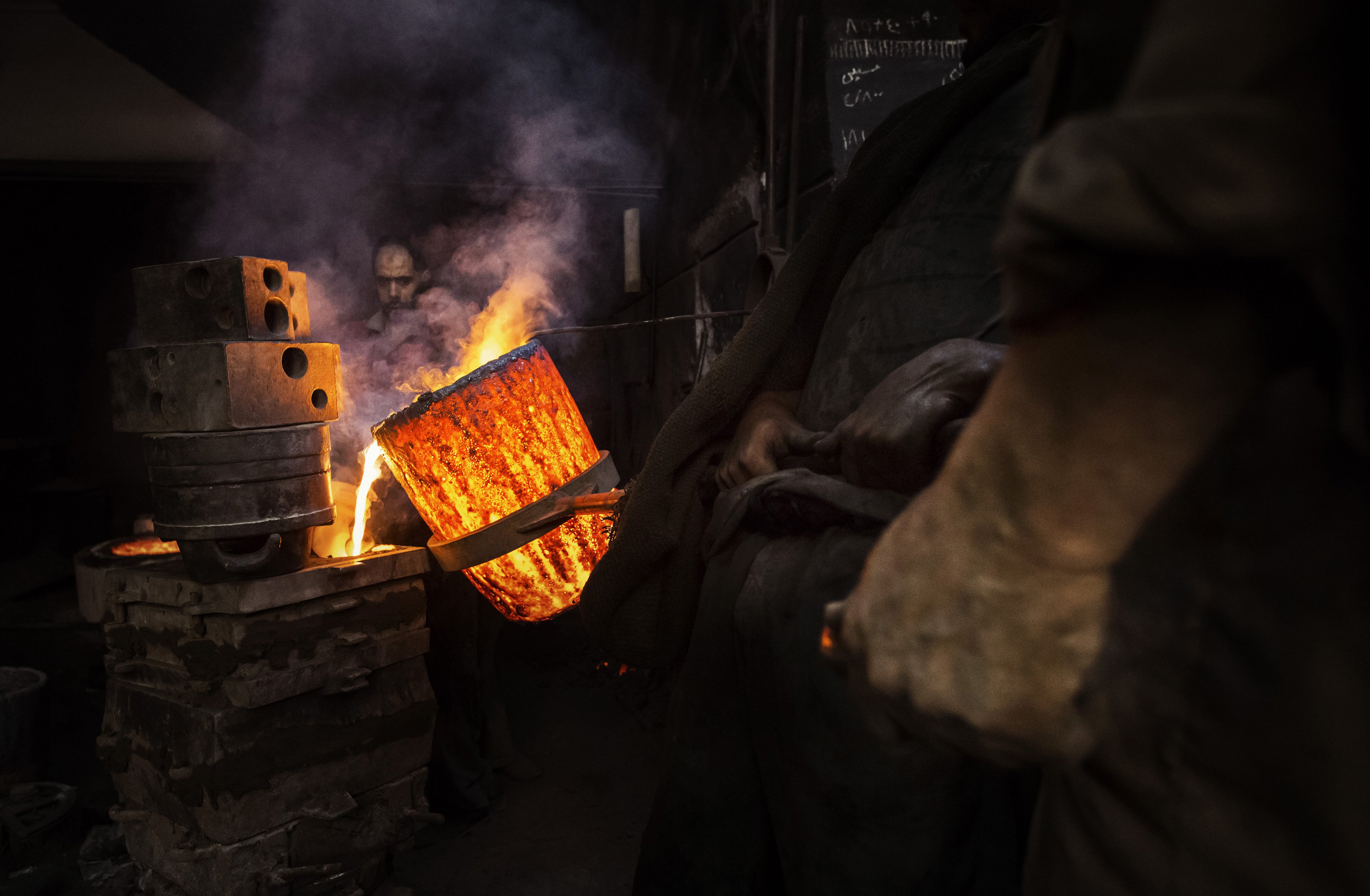 Still from The Forgotten (metal casting), 2021, courtesy of the artist.

Still from The Forgotten (metal casting), 2021, courtesy of the artist.