Oscar Murillo’s large-scale installation in the gothic church St. Eusebius consists of monumental decorative windows, a video work, and the rock-like corn and clay sculptures that frequently appear in the artist’s installations.

The imposing, finely-wrought windows are ‘Shabaka’ – made by Azerbaijani artisans following traditional methods that incorporate wood and stained glass to create intricate geometric patterns. On a visit in 2015, Murillo witnessed the post-Soviet country’s Shabaka practice and dilapidation of formerly thriving industrial areas. This set of windows commissioned by the artist incorporate discarded rusted metal in place of decorative glass, intertwining histories of labour in windows that are beautiful, yet opaque.

With the windows transplanted to a European church, away from their traditional locations in Islamic mosques and palaces, the work continues the Murillo’s practice of creating site-specific installations which explore how structures of power are inscribed into architectural spaces. In the summer of 2020, he collaborated with the church in his hometown of La Paila, Colombia, setting up a food distribution centre to help residents affected by the Covid-19 pandemic. Later, he staged an exhibition for the community, with paintings that he had made during quarantine. Murillo’s complex relationship with spaces that connote religion and industry is informed by his awareness that the church and the factory are the twin pillars of La Paila's community – serving essential needs while perpetuating cycles that keep most of the population working, consuming, and living in relative hardship.

The pile of corn and clay sculptures also connect to notions of labour and nourishment, corn being a staple cultivated across many regions. The rock-like objects made by the artist and his family members in different locations engage with toil and sustenance, each one involving the methodical process of grinding corn, shaping, and baking. Murillo’s studio also operated as a food distribution centre this past year, adding a new dimension to the centrality of staple foods in his work.

The video locates us within the La Paila: neighbours and musicians gather to play music and share food; the roaming shot of a handheld camera creates the sensation of being a fly on the wall, intimate and dissociated as the subjects’ bodies are reduced to a cacophony of shapes in motion. The meandering camera focuses on fragments such as the union jack emblem incongruously stitched onto the cap of a singer. At odds with the music, this detail reminds us of Murillo’s insistent interest in the intersections of cultures.

disrupted frequencies is a recent body of works by Oscar Murillo, which builds upon Frequencies, the artist’s long-term collaborative project with school students across the globe.

Initiated in 2013 with political scientist Clara Dublanc and members of Murillo’s family, Frequencies involves visiting schools around the world to install pieces of raw canvas on classroom desks and inviting students to freely draw, write on and mark their surfaces. The canvases, with their accumulated intentional and non-intentional marks, are collected after approximately six months of ‘sedimentation’ in the classroom. Over the past 8 years, the project has visited more than 300 schools in over 30 countries, working primarily with students aged 10-16. The growing archive of canvases produced now exceeds 30,000, from all corners of the world, with the non-profit Frequencies Foundation implementing the project and managing the archive.

The impetus for Frequencies came in part from a chance encounter when Murillo visited his own former school as an adult, and noticed the densely graffitied wooden desks, sparking memories of adolescence; the desire to break free from the normative environment of education and the release found in drawing and mark-making. Identifying with the students, Murillo approached the project as a collaboration between himself and the many participants, and in this recent series of paintings, has repurposed canvases from the archive and added his own marks to them.

Stitching together pieces of canvas – a technique characteristic of Murillo’s practice – the artist has worked directly onto a patchworked surface with oil bars in varying shades of blue. The works recall Murillo’s surge series, which also features dense fields of blue in wave-like formations, flooding the paintings’ planes, with an effect the Murillo has likened to the force of ‘obliteration’ of water.

These new works, as their title suggests, are an intentional disruption of the intellectual project of an archive, pulling canvases from different regions together. Each individual painting’s title contains the names of the countries its component canvases came from, deliberately creating tension through the splicing together of objects from different geographical, social and cultural contexts. Further tension is created through the intervention of the blue painted planes, which for Murillo act simultaneously to erase, and to reveal. Recalling both the ocean and the air, they come to symbolise that which binds geographical space, allowing both connections and disconnections, or conflicts, between territories. 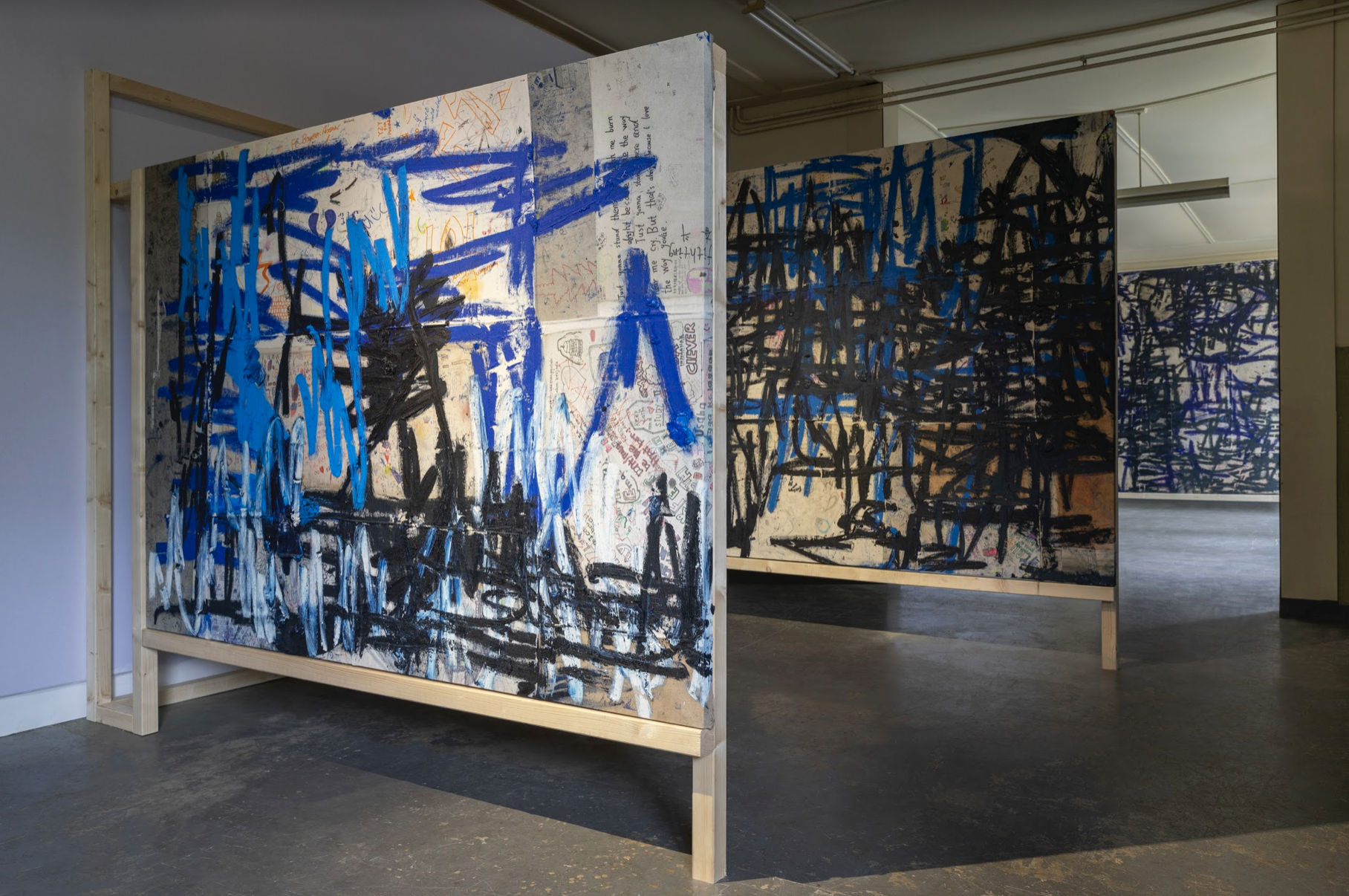 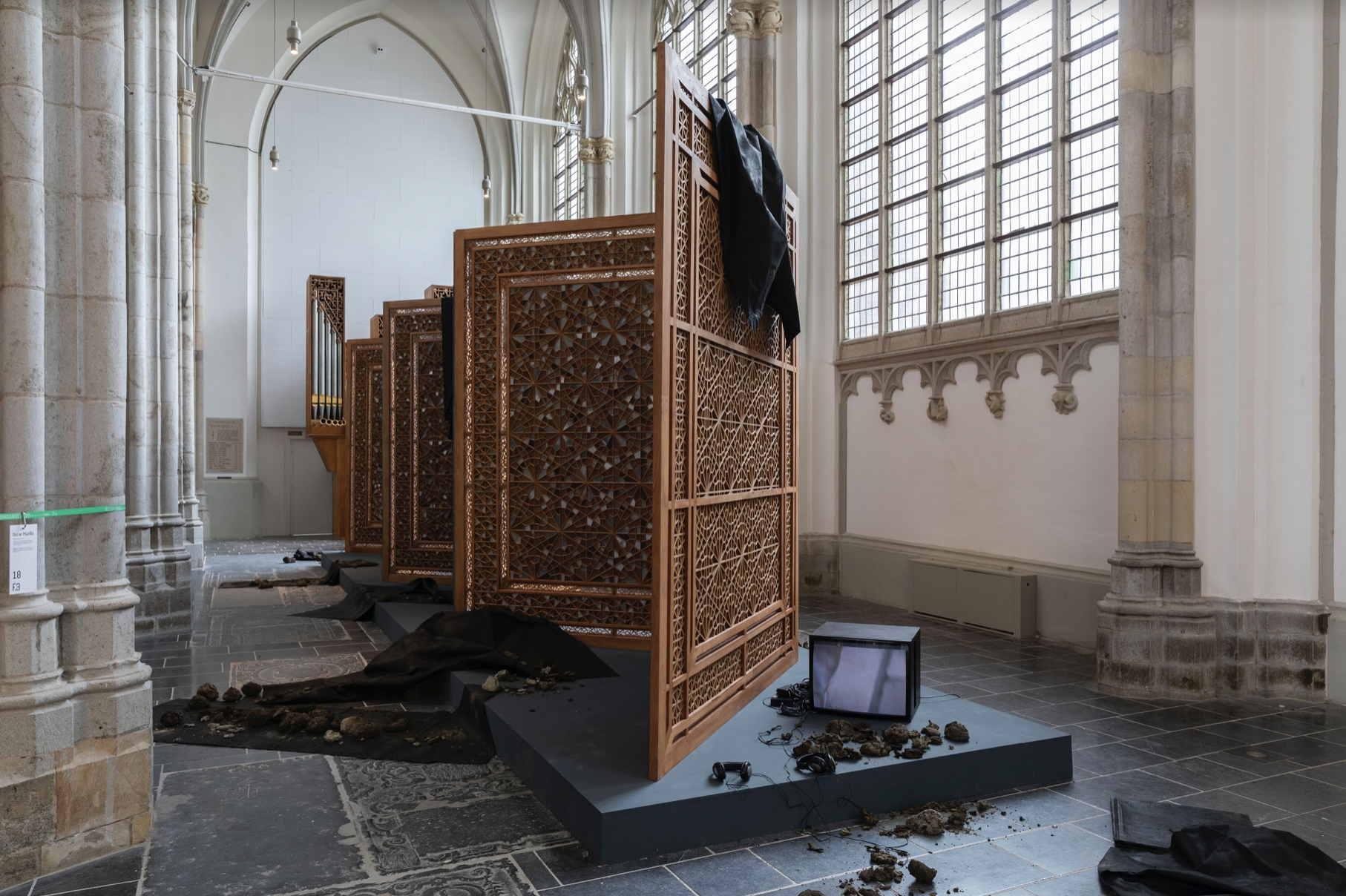 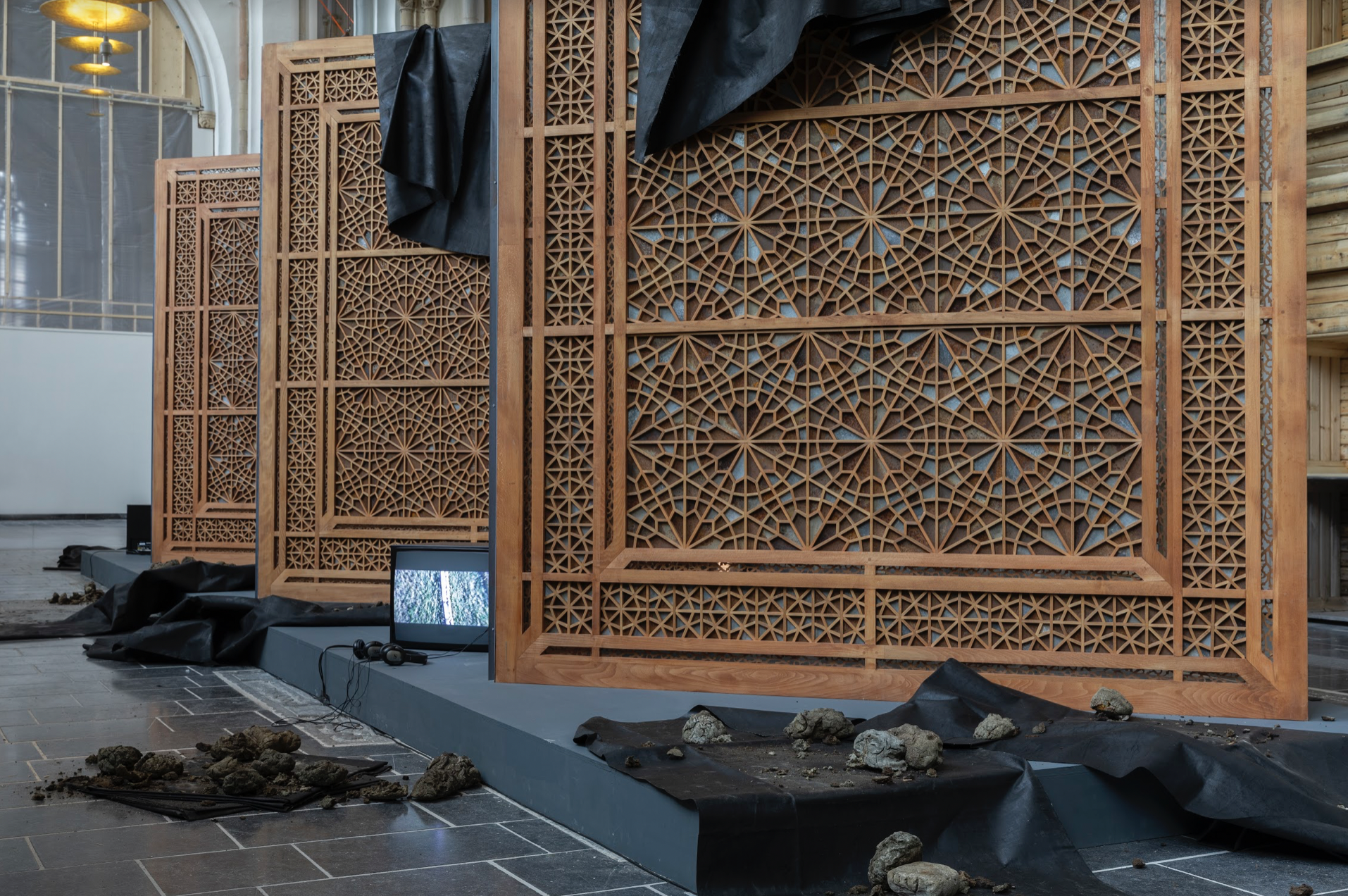