Hier. moves seamlessly between politically charged reflections and personal memories. Amid the renovation of Museum Arnhem – a place of conservation in transition – five young women express themselves in poetry, music and conversation. They explore themes of hybridity, transnationality and diasporic sensitivity: essentially, the political instrumentalisation of identity and cultural renewal in light of colonial history within contemporary society. The location is also a ‘voice’; built in the late nineteenth century as an ‘outdoors club’ – a gentlemen's club founded by those who could not gain membership to centrally located Groote Sociëteit – it has been a municipal museum of modern and contemporary art since 1920, when its first collection was donated by a prominent colonial family. The museum has pursued an emancipating (acquisition) policy since the 1980s.

In the film, the building is stripped down to its foundations: worn concrete and elegant art nouveau features sit next to each other. Within this contrasting site of rubble and potential, the cast consists of FRED band members Lyana Usa, Thirza Hiwat and Josephine Spit, who split since their 2015 founding and now pursue, respectively, electrical engineering, information science and architecture; poet Adejumo Pelumi whose practice extends to fiction and poetry; and art historian Lara Nuberg who researches, writes and speaks about the colonial pasts of the Netherlands and Indonesia in a decolonial way. These three groupings form the film’s three ‘sonic lines’: FRED improvises traditional kroncong music before moving into their own contemporary song; Adejumo reads a text that results from their conversations; and Nuberg spontaneously reacts to various documents, statements, the music and the building. In editing the work, these three lines became interwoven and communicated with each other.

With music and poetry, there is not only sociopolitical urgency, but existential and vulnerable themes that lend themselves to the tender confidence with which the protagonists discuss love, the sorrow that comes with it, questions and certainties – the basis for a changing possible future.

Open Kino Pavillon is an architectural work by artist Erika Hock, originally developed in 2012 as Cineorama – Pavilion of Moving Images in Düsseldorf’s Jacobigarten, a hospitable structure with an accompanying film programme. Hock, whose artistic engagement blurs the borders between visual art, design and architecture, has reworked this temporary projection space intended for outside use to suit the scale of sonsbeek. Open at both sides, the structure for showing and viewing has the elegant logic of a single folded piece of material, drawing attention to spatial volume and experience. Hock’s works often function as hosting structures and here the sculptural form is specifically adapted for the presentation of Hier. and located at the well-frequented Steile Tuin in Park Sonsbeek. Corresponding to both artists’ interest in a practice that offers an open space, Open Kino Pavillon invites free use outside Hier. screenings with the possibility to reserve for regular use beyond its presence as enjoyable shelter.

Erika Hock (1981, Dshangi-Dsher, Kyrgyzstan) is an artist whose practice is characterised by the fluid crossover of sculptural and architectural elements, as well as an extended interest in tapestries and furniture that investigate meeting points between history, society and culture. Her solo exhibitions include: Female Fame, Skulpturenmuseum Glaskasten Marl, Germany, 2020; Salon Tactile, Cosar HMT, Düsseldorf, 2018; Hotel Atlantik, Kunsthalle Lingen, 2018; Second Home, Philara Collection, 2017; What Bananas Say, Salzburger Kunstverein, 2015; and The Seamstress, Her Mistress, the Mason and the Thief, Tenderpixel Gallery, London, 2014. Her work has also appeared in group exhibitions such as Examination of a Case, Kunstsammlung Chemnitz, Germany, 2020–21; Mind the Gap!, Museum für Konkrete Kunst, Ingolstadt, Germany, 2020–21; and Un-Scene III, Wiels, Brussels, 2015.

Wendelien van Oldenborgh (1962, Rotterdam) develops works in which the cinematic format is a methodology for production and the basic language for presentations. Through public film shoots and collaborations with participants in different scenarios she co-produces scripts towards the work’s final outcome. Recent solo presentations include: tono lengua boca, CA2M, Madrid, 2019; Future Footnotes, Significant Other, Vienna, 2018; Cinema Olanda, Dutch pavilion, 57th Venice Biennale, 2017; .As for the future., DAAD gallery, Berlin, 2017; and From Left to Night, The Showroom, London, 2015. Van Oldenborgh is a member of the (Dutch) Society for Arts and a recipient of the Dr. A.H. Heineken Prize for Art (2014). In 2017/2018 she was a Fellow at BAK, basis voor actuele kunst, Utrecht. A monographic publication, Amateur, was published in 2016. 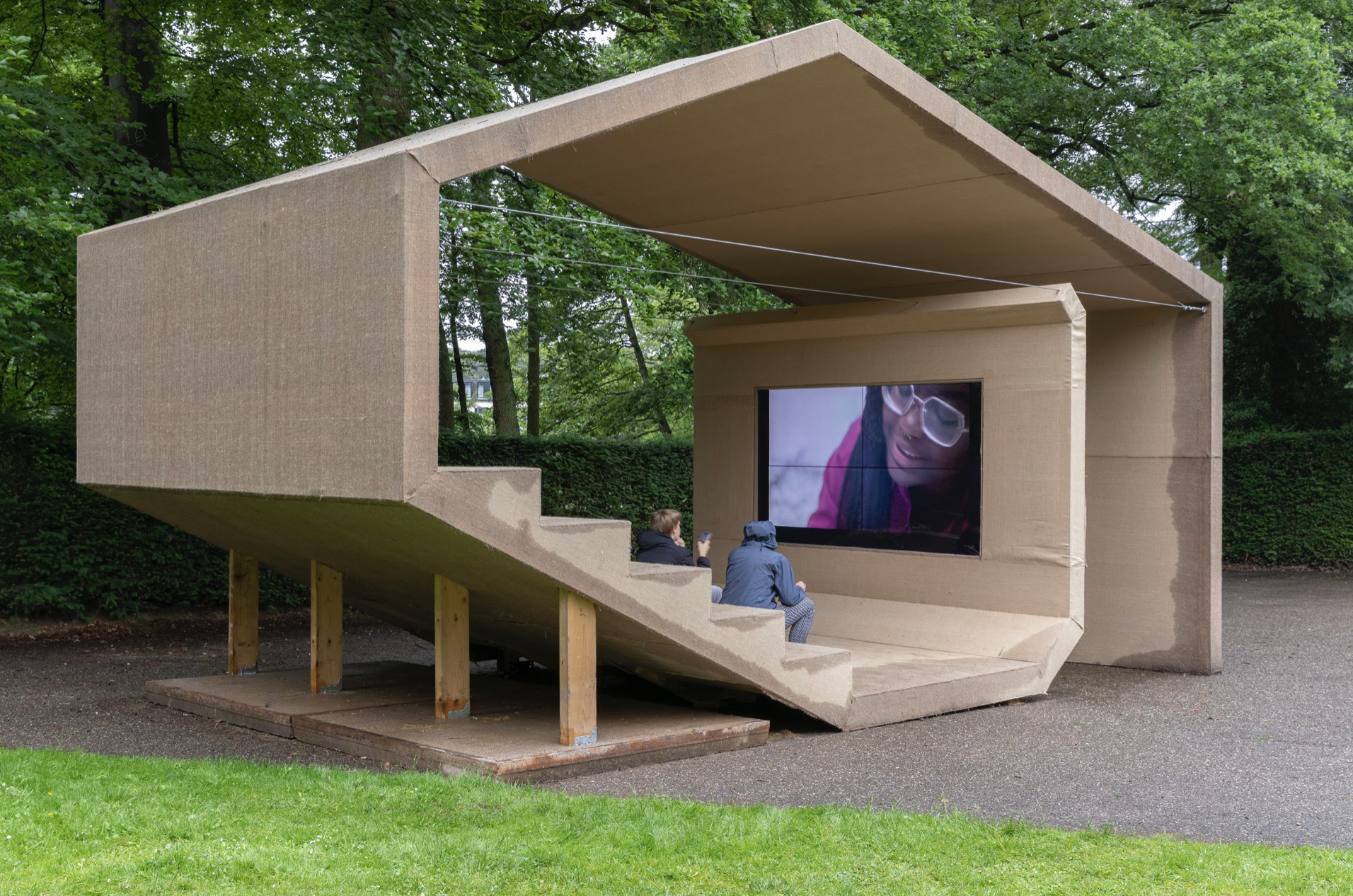