Back to editorial room

What you want and what you will // Working for your dollar bill // Walking home, a youth gets killed // Police free to shoot at will // Nine to five you know the drill // Weekends are a short lived thrill // Come put it on over till it spill // Taken until they've had their fill // Sad to see the old slave mill // Is grinding slow, but grinding still 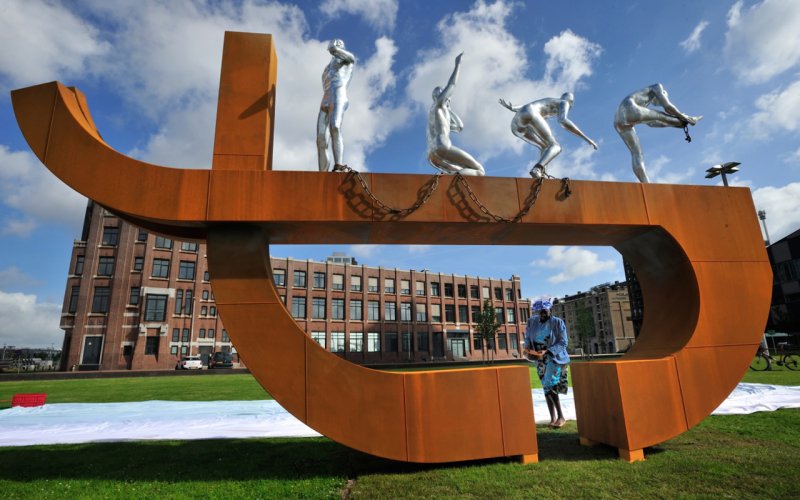 On this 157th anniversary of the Abolishment of Slavery in the Dutch Kingdom, we commemorate. First and foremost, we remember those who were forced to live life in enslavement. Generations that were vehemently exploited, mistreated, and turned into objects for unspeakable reasons and profit. Also, we commemorate all the people who suffer in the afterlife of slavery, and the new forms it has morphed into, or evolved into: from forced, contracted labour to underpaid work under unbearable circumstances. All justified by an economic system that only works for a few.

Although July 1st marks the date slavery was abolished in Suriname and the chains were broken (Keti Koti), today shows us that there is still a lot of work to be done. Grinding slow.

For this occasion we have translated a text by activist and anthropologist Mitchell Esajas (The Black Archives) on Anton de Kom, a Surinamese resistance fighter and anti-colonialist author. Esajas wrote the foreword for the most recent edition of Wij Slaven van Suriname (We Slaves of Suriname, 1934). A personal account of his relation to the groundbreaking book by De Kom in which the writer meticulously analyses and dissects the ways slavery continues its stronghold on the lives of black people and people of colour; especially those with a direct ancestry from the enslaved populations around the globe. Still, nothing works only one way. And both De Kom and Esajas prove themselves aware. Aligned with radical communist thinkers worldwide, De Kom connects the heritage of slavery to the colonial frameworks in the Dutch Indies (contemporary Indonesia), the workers movements and the position of white workers in the Netherlands. Exploitation and inhumane living conditions were not limited to the Dutch Guyana that De Kom knows and describes so well; he also pleads for a collective effort to change the situation of all exploited people worldwide. Esajas positions De Kom in a line of fundamental and radical black thinkers and activists, as well as in a genealogy of Surinamese resistance. Unsurprisingly, the university of Suriname's capital Paramaribo is named after De Kom.

Just over a week before the publication of this text you are reading here, we were pleased to be informed that De Kom was added to the Dutch national canon, as one of 50 events and people who collectively comprise the essence of Dutch history (or histories). He is the first Surinamese person to be added to the renewed canon of Dutch history. Perhaps long overdue, but nonetheless well deserved and much appreciated by the Surinamese in Surinam, The Netherlands and beyond. De Kom will now be part of every curriculum and education in the Netherlands.

To take the afterlive of slavery and its structures into account, we want to present the documentary film Su solo i playanan (His sun and beaches) by Sharelly Emanuelson. For her graduation from the art academy of Utrecht, she visually reflected on the ways in which the heritage of Dutch colonialism plays an important role still today on the island of Curaçao, her place of birth to which she returned after her studies in The Netherlands. The frameworks and economic structures that relate to ownership of businesses, land and the possibility to prosper are explored via interviews and personal considerations, supported by visuals of the sunny beaches of the island. More important on this day, as at the moment the island is suffering from Covid-19 and the subsequent collapse of the tourist economy. Over half of the population currently is dependent on food aid, and the local government is forced by the Dutch government to impose sanctions and decrease social security and government jobs, putting even more in precarious danger and food scarcity. In the past weeks and days protests have turned violent and buildings have been burned down across the island. Outcomes of the dire circumstances for the native Curaçaonaar that hold many relations to Anton de Kom’s analysis and the reflections by Emanuelson. Grinding still...

why Anton de Kom's 'We slaves of Suriname' never ceases to inspire
This website uses cookies for analytics.