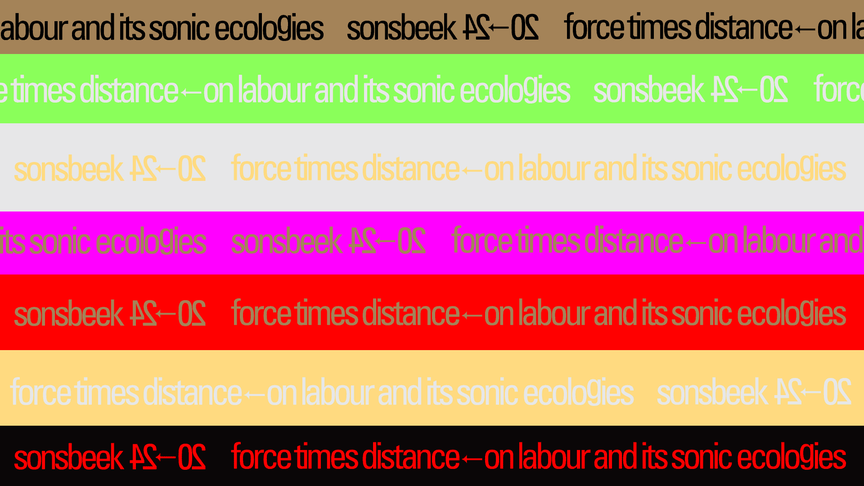 Update 1.4.2021: The 12th edition of sonsbeek20→24 titled Force Times Distance – On Labour and its Sonic Ecologies, initially planned for summer 2020 and rescheduled for 2021, will take place in July and August 2021. We also take this opportunity to announce new collaborations with Stedelijk Museum in Amsterdam and Centraal Museum in Utrecht.

New opening dates
This edition of sonsbeek aims at stretching and decelerating the traditional format of large-scale art exhibitions. Shifting this format has become more important than ever before, in order to achieve a long-term, reciprocal and dedicated relation between artists, institutions, place and audiences. Since its postponement was announced last year, sonsbeek20→24 has been working on various platforms like exhibitions, discursive programs, residencies, publishing and radio. These platforms will be explored throughout its time frame by engaging audiences and contributors in a shared journey with main partners Museum Arnhem and ArtEZ University of the Arts, as well as other institutions in the city of Arnhem. The exhibition that will open on April 10, 2021 will be the next step in this process of ripening and fermentation of Force Times Distance – On Labour and its Sonic Ecologies.

New collaborations with Stedelijk Museum and Centraal Museum
At Stedelijk Museum, works by Dutch painter and composer Sedje Hémon (1923–2011); artist and designer Imran Mir (1950–2014) from Pakistan; and Afro-Brazilian painter, poet, essayist, playwright and politician Abdias do Nascimento (1914–2011) will be shown. Bonaventure Soh Bejeng Ndikung, artistic director of sonsbeek20→24, states: “In the curatorial framework of sonsbeek20→24: On Labour and its Sonic Ecologies, we chose to listen carefully to the screeches as much as the whispers emanating from those spaces, and responding with the works, the voices, the beings and presences of three historical artistic positions: Sedje Hémon, Abdias Do Nascimento and Imran Mir. All three artists navigated the waters of abstraction, expanded the shutters of modernism, reconfigured as well as liberated minimalism from the claws of the Western invention myth and significations, as well as situated the notion of conceptualism within other and wider geographies and cultures. We do think that the Stedelijk Museum offers an appropriate institutional, artistic and historical framing within which notions of modernism can be questioned and pluralized.”

Centraal Museum in Utrecht will be partnering with sonsbeek20→24 in a continued collaboration format of interventions and presentations connected to the museum’s collection, which expands from visual art of the middle ages to contemporary work, including important collections of applied arts and fashion. "Over the years, artists of sonsbeek20→24 will be invited to engage with the collection of The Netherland's oldest civic museum. One of the challenges of our time is the re-reading of collections and archives. What stories do collections tell about their own limits, about the history of labour, about who narrates and who is narrated about? This rich collection will be our food for thought for the next years," Ndikung states further.

From Arnhem, and Beyond
The exhibition is supported by a lively public programme, that kicked off online in June in the form of an Editorial Room, which began to unpack the central themes of the curatorial framework by way of essays, performance, mixtapes, films and radio broadcasting. In addition, sonsbeek has set out a further conversation with the public in the form of two conjunctions organized in collaboration with Dutch Art Institute (DAI), in Tunis and at Radio Kootwijk on the Veluwe. In 2021, this programme unfolds into a more extended conversation, connecting the themes to local labour histories by working together with communities, artists and entrepreneurs to expand sights, sounds and experiences of sonsbeek20→24.

With the new partnerships sonsbeek20→24 expands its original format that traditionally focused on presenting works in Arnhem’s Park Sonsbeek. In 2021, the 15th century Eusebius Church, an iconic landmark and important point of gathering for Arnhem citizens throughout the centuries—most notably in its ruins shortly after World War II—will host a large number of works in which the relation between ritual and labour is explored. At the centrally located Collectie De Groen several artists will present immersive works that evolve around notorious projects of human and natural extraction all over the globe. At Rozet, sonsbeek’s archive will be shown, a recent undertaking to enhance the sustainability of the historically significant art event. The investigation and manifestation of reflections on labour and its sonic ecologies will continue with a large number of pavilions and installations through the parks of Sonsbeek and Zypendaal, Buitenplaats Koningsweg in collaboration with Machinery of Me and Atelier Freiraum, via De Hoge Veluwe National Park stretching all the way to the renowned sculpture garden of Kröller-Müller Museum. There, three monumental sculptures will be installed that both challenge and meaningfully expand the overly present western positions in form, choice of materials and crafts, as well as conceptual approach.