listening matters in the archive 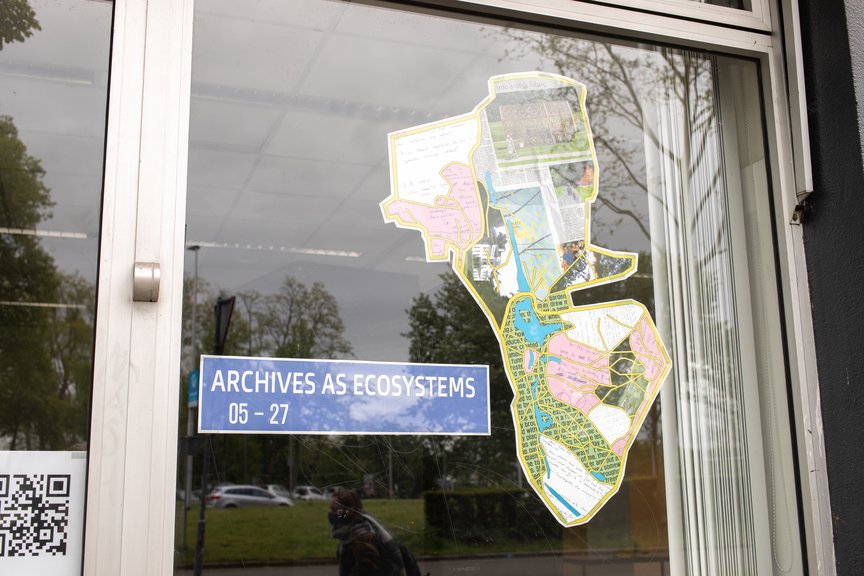 From February to May 2021, second and third-year students of BEAR (Base for Experiment Art and Research) ArtEZ became archivists excavating the Sonsbeek archive. Taking sonsbeek20→24 and its current curatorial theme, Force Times Distance On Labour and its Sonic Ecologies as a starting point, the goal was to see what happens when archives become a site for listening.

The five podcasts use interviews, storytelling and fabulation to make clear that archives, when approached through listening, are not only places of categorizing and preservation, but dynamic sites of affectual encounters, of frustrations of what can be accessed and what remains foreclosed, and of emergent imaginaries that can re-visit past narratives while sounding out a futurity in the making.

In this podcast we explore the nature of archives, the different forms they can take and their varying accessibility. In particular we reflect on the sporadic nature of Sonsbeek Archive due to its irregular occurrence. We discuss the potential for more creative interactions with archives as exemplified by Ajna and Keonwoo. Ajna created a written work on the life of a piece of archived material, and Keonwoo, an audio piece archiving the sounds and feelings inspired by his experience of the Sonsbeek park as opposed to the alienation he encountered when viewing the 1986 Sonsbeek documentary by Wouter Swaneveld and Jaweck Duijts. Proposing the metaphor of the archive as an ecosystem, our conversation reflects on living, sporadic, and accessible archiving practices.

Come join us on a journey through the magical world of the Soonsbeek exposition, together with professor HSL, a researcher of the occurrence of Spoonmonsters. Follow along through the Sonsbeek park, where many cute memories are archived into the little spoonmonsters. Such fun! But watch out for the dark corners! There are many things unknown about the creation of these creatures. This journey might be more dangerous than what you expected. In the shadows hide beasts that are worlds apart from our cute monsters. But are the beasts really this bad?  Are you a born researcher? Maybe you’ll be able to help professor HSL uncover the truths behind this exposition. The park may have more to hide than you’d expect…

From the Sonsbeek archive: Henk Schuiling collection of leftover spoons from a piece by artist Michael Ross’ Age of Spoons Sonsbeek 2001. Please note, the podcast includes an interview with an active member in Arnhem’s art community that does not represent the views of the ruangrupa curatorial collective of Sonsbeek 2016, to whom the interviewee refers.

This podcast communicates the walking and the felt vibrations of the Sonsbeek by three godly women. Taking a method articulated by artist Ann Hamilton’s archived correspondence from Sonsbeek 93’, we, Lisa, Joëlle and Heidi, took walks in the Sonsbeek as a daily ritual and recorded our impressions in an audio journal filled with searching and intimacy. We each wrote texts based on our walks and experiences in the park to which the others responded (or not!). The ambient sounds of the Sonsbeek park are layered into this soft-spoken diary/journal/research piece, inviting the listeners along with us as we tell our stories. What becomes clear is that Arnhemmers hold a special place for the Sonsbeek park, and we hope that this little story of ours will spark curiosity to come and see Sonsbeek again and again.

From the Sonsbeek Archive: Correspondence with artist Ann Hamilton Sonsbeek ’93.

In this next episode of Op Het Bankje, Amber and Fie are on the search for what it takes to fill the gaps in a digital archive. By taking one photograph out of the Sonsbeek digital archive, we began our research. Little information was at our disposal and we figured that we needed to do some real detective work. By making our own deductions, reaching out to the Sonsbeek archivist Petra Smits and meeting the man in the picture, the one and only Luuk Broer, our research pointed out that an archive really takes on a shape and becomes valuable when real life connections are made and can seep into its structures.

From the Sonsbeek archive: Photo donated by Luuk Broer, a participant in the ‘inauguration’ procession of Sonsbeek 2008.

The starting point for our podcast were several items we encountered in the Sonsbeek archive that triggered a response: a story from a newspaper ‘Beelden spiegelen zich in de vijver van Sonsbeek’ signed v.R from 1952; a drawing from the Sonsbeek ‘71 Gelders Archief; and a drawing from the article ‘Sokkeldans Sonsbeekan' by Johan Meeus. Listen as our voices guide you through a series of three tales that together weave a fabulated cartography of the Sonsbeek park.