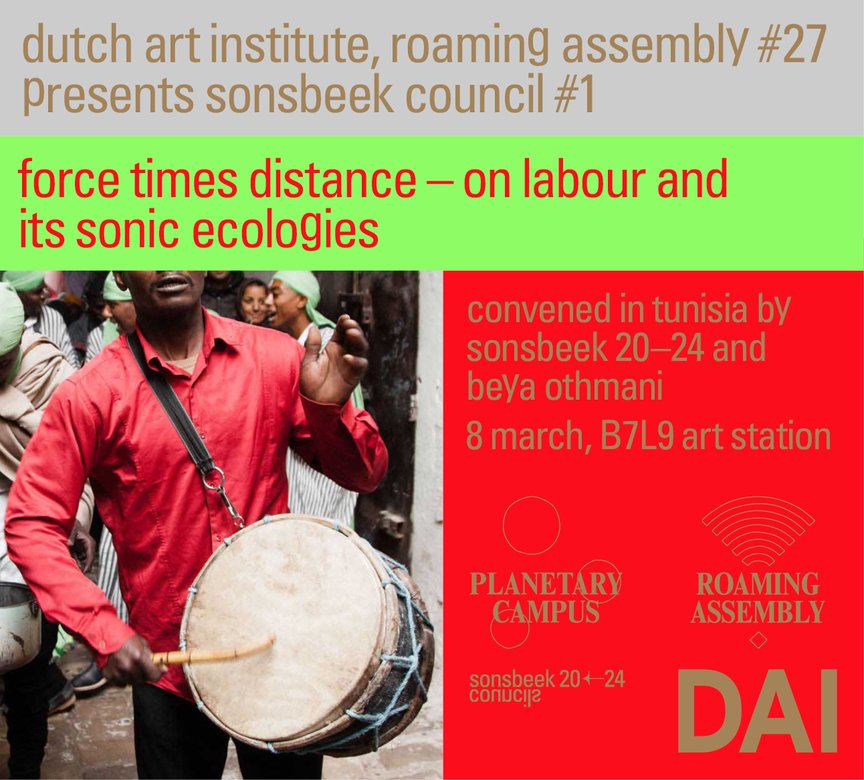 The DAI and sonsbeek 20→24 (the quadrennial that radiates waves outward from Arnhem, The Netherlands, to the rest of the world and back) are joining forces for some exciting happenings, scheduled between March 8 and August 31. Beginning in Tunis, where from March 4-18 the DAI will set up its temporary residence, we are extremely pleased to invite you to:

Sonsbeek Council #1: Force Times Distance - On Labour and its Sonic Ecologies is the first act in the framework of sonsbeek´s extended and dis-placed programme. The sonsbeek Councils situate themselves beyond the Netherlands in an effort to create alliances, think together, relate, and flesh out the concerns of sonsbeek20→24 with artists, curators, activists, theoreticians, and other practitioners within other geographies and other sociopolitical realities.

This opening chapter consists of a seamless flow of contributions from 2 and until 9pm including music, performances, films, panel discussions, and lectures. We begin by listening to the spiritual in its coexistence with the rhythms imposed by value production. With the Hadhra of Saida Manoubia we hear the invisible spirits of the saint patrons of Tunis, and the mystical labour of healers and musicians operating in their shrines. With the Stambali group Sidi Ali Lasmar, performing musical interludes throughout the program, we lend an ear to the histories of enslaved people, their descendants, their ancestors, saints and jins as written into the Stambali musical tradition. Among  others, we will deliberate on how spaces of sex labour in Tunisia were shaped over time by colonial forces, how labour in the waters of the Nile has shaped different musicalities and listen to sonic interpretations of the experiences of izinyanga zensimbi (pre-colonial metalworkers in KwaZulu, Africa)

The title, just like sonsbeek´s next edition, takes its cue from the physics formula for work = force X distance, but metaphorically it invokes the work as in labour conditions, force as in disproportionate power gradients, times as in the non-linear understandings of the notion of time, and the collapsing of distances, as in the here and there. At the crux of the project is the possibility of deliberating on notions of and relations between work/labour and the sonic, and the possibility of thinking about the history of labour and conditions of work through sonicity.

It is an invitation to delve into socioeconomic relationships as framed by race, gender, class structures and politics, as well as how these are manifested in the sonorous.  The idea is to tackle the myriad of unheard stories and hardly visible professions that make things be but are rarely represented and the ones that have been rigorously and malevolently erased from collective history. To provide space for listening to experiences of the labour force that erects and builds, that serves and provides, that protects and cares, however merely – if at all - acts as a support or minor role in most representations. It aims to invoke, evoke, provoke new thoughts, ideas and perceptions, engage with an expanded and augmented musicality that invites and encourages different modes of listening, that want to make visible which is already there but remains unseen and unheard, that recover, restitute and repair the still segregative conditions under which we live, between visible and invisible workers, bodies and lands.

Ali Saidane will take us through his archive of Tunisian popular music and poetry. In conversation with Iheb Guermazi, they will discuss historical phenomenons of creation, transformation and hybridisation of sound and language in Tunisia, by looking at the urban musical genre of Mezwed for example or popular poetry from the mining region of Gafsa.

16:20 - Talk by Alia Mossallam: How do memories travel through sound? And why does sound travel through time? An ear into the sonic memories of the builders of the Aswan High Dam (1960-1964)

The Egyptian worker was a core element in Egypt’s anti-colonial, third-world project, instigated and engineered by a military regime, in the name of Arab Socialism. The builders of the Aswan high Dam embodied this symbolism, particularly as peasants who ‘transformed’ into workers on the Dam-site. Once living in fear of floods, they were now industrially manoeuvring the Nile, slaying it to their own will. The workers were members of parliament; intellectuals - published in workers’ publications and children’s comic books; ideologues so long as they didn’t depart from the framework of socialist surrealism. They were the Nation’s loudest, most trumpeted builders, and yet the ones least heard. In this talk, Mossallam will locate the worker in the songs and Operettas where the voice of the worker, the sound of his/her machinery was weaved in music and song so powerful and convincing that they continue to echo in workers’ memories until this day. Although these songs seeped into the vocabulary of their experiences, they didn’t flood out their own ideas and oppositional memories, offering a combination of mainstream and personal sonic elements that weave stories of what the Dam promised and what it offered instead. This is an inquiry into how memories travel through sound, and what the significance (and power) of sharing the sonicity of the experience 60 years later is.

What happens when we take ownership of our voice? Where are we when we are in silence?  Tracing histories and the subtle relations of discipline, control and resistance that flow through music in the workplace and about the workplace - what is a work song in 2020?  Revisiting the BBC’s Radio Ballads, produced between 1958-1964, that used music, song and the voices of workers, Amal Khalaf reflects on the projects she has developed with artists, musicians and migrant labour unions, domestic workers, cleaners, and hotel workers in London.

17:50 - Talk/screenning by Ali Tnani on his piece Even the Sun has Rumors

A leading practitioner in the field of conceptual art, Tnani is known for his multimedia installation work examining social issues in post-revolutionary Tunisia. With a practice that draws on installation, drawing, and photography, he explores the question of erasure and the negative in narratives of traces, memory and history in an era of hyper-connectivity.

Tnani conceives the trace, as a semiotic index or remnant, an extension of his notion of ‘counter-spaces’ that are simultaneously plastic and political. These sites shed light on the inherent contradictions and open a space for questioning hegemonic utopian narratives. These disruptive spaces expose the phantom signs of history in contemporary life: that which has been written, is being written and will be rewritten again in the future.

Izinyanga is a sonic interpretation of the experience of izinyanga zensimbi (pre-colonial metalworkers in KwaZulu, Africa): incorporating electronic sounds mimicking beating metal, and the incorporation of high frequency sounds which designate the area of the rolling hills of the Drakensberg escarpment. Visually the creative output features a silhouette screening of a person enacting the tasks of a metalworker in front of the furnace, it meditates on the labour involved in this activity, and the context under which the metalworking was regulated according to moon-cycles, etc.

19:20 - Talk by researcher and architect Iheb Guermazi on his study: Sex labor and the geography of sin: A history of the brothels of Tunis

A paper that examines the spatial and urban changes that touched spaces of sexuality in Tunis prior, during and after French colonization of the city.

Admission is free ~ but please join our facebook event  ~

All lectures and talks will be in English.

*** If you wish to join our communal dinner at B7L9 Art Station around 21:30, please feel free to contact Nikos Doulos and make a reservation by Wednesday 6th of March.

Dinner contribution: 25 TND (to be settled by cash on spot).

Planetary Campus is an innovative conceptual space (without walls) where the MA curriculum "DAI Art Praxis" meets with a wide variety of external parties. A welcoming hub where we host a fleeting, affective community, where art and research are generously shared, where complexity can be embraced and intellectual intra-actions are fostered, aiming to endow our praxes, wherever they are operational. The Planetary Campus constitutes a productive interface between academia and the world, between academic and artistic researchers, practitioners, activists, intellectuals, institutions and organisations. As an infrastructure Planetary Campus is the container for a variety of activities initiated by the DAI:

One of them is the Roaming Assembly, a recurring public symposium functioning as it were as the DAI-week's 'centerfold' event. This state-of-the-art speculative and hybrid program explores specific themes and topics of contemporary relevance to the thinking of art in the world today.

Although closely interlinked with the DAI's curriculum, Roaming Assembly editions are not conceived as plain extensions of the regular DAI classes and seminars, but rather envisioned as sovereign happenings, designed to mobilize our bodies, our intelligences.