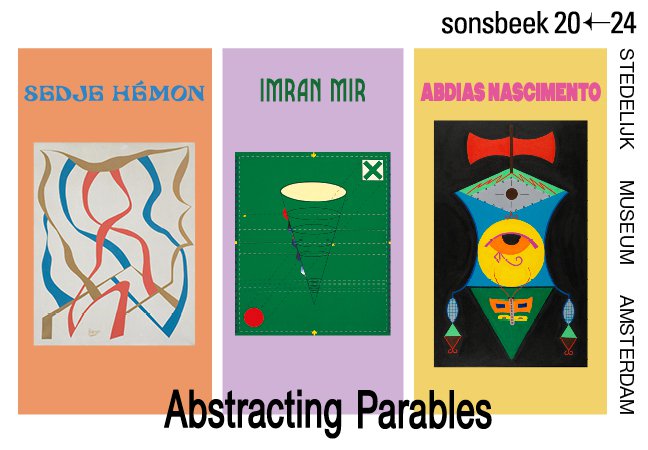 Abstracting Parables is a manifestation of three distinct historical voices and artistic positions, each proposing unique understandings of how abstraction can be translated into multiple and complex languages. The exhibition brings together the works of Dutch-Jewish painter and composer Sedje Hémon (1923-2011), Afro-Brazilian painter, poet, essayist, dramatist, and political activist Abdias Nascimento (1914-2011), and Pakistani artist and designer Imran Mir (1950-2014).

Conceived as an exhibition with three in(ter)dependent chapters, Abstracting Parables is approached as a work of translation. In its meaning ‘to carry across’, the exhibition deliberates on translations of meaning to form, thoughts to symbols, symbols to language, and language to experiences.

Central to this exhibition is Hémon’s, Mir’s, and Nascimento’s relationships with abstraction, geometry, spiritualities, histories, and the way their works inherently challenge the confines of modernism–opening up a world of multiple modernisms. The exhibition highlights the artists’ multifaceted oeuvres across geographies and histories, as tales that assemble and interlink aesthetic, socio-political, spiritual, and scientific discourses.

By presenting these positions at the Stedelijk, the institution continues its critical engagement with the blind spots, historical gaps, and silences in its collection.

Sedje Hémon, Emotion of Spirits
Sedje Hémon’s (1923-2011) artistic practice was a deep deliberation on natural sciences, as well as an exploration of other ways of knowing. Her work was strongly influenced by her lived experience as a Shoah survivor and a member of the resistance movement. Educated as a violinist, incarceration during WWII left Hémon physically unable to play, upon which she turned her attention to painting—without ever abandoning music.

This exhibition, which takes its title from her painting Emotion of Spirits, focuses on the work she produced in the 1950s and 1960s. During this time, she developed an intricate method for translating her paintings into musical scores.

Hémon described her paintings as musical compositions, and their abstract forms are to be read as such—in relation to musical param- eters such as duration, pitch, and timbre. Her visual works can actually be performed musically according to the system that she herself developed. Defiantly, Hémon worked to show the common origin and intersectionality of all arts and sciences, culminating in the develop- ment of a theory for the “integration of the arts.”

Around 1960, with the support of art historian Hans Jaffé, Deputy Director of the Stedelijk Museum, twenty drawings were donated by Hémon to the Stedelijk Museum. Although her work has been exhibited internationally, including at Documenta14 (2017), this exhibition marks the first major presentation of Hémon’s work in the Netherlands. 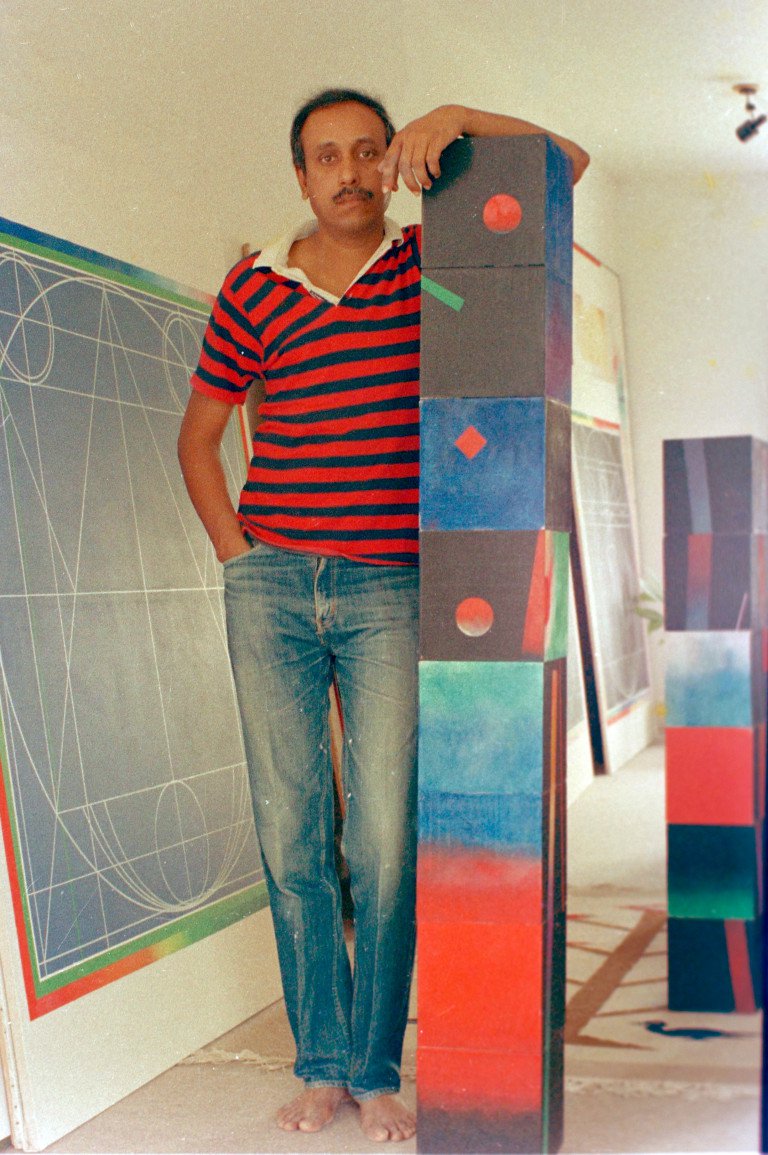 Imran Mir, A World That Is Not Entirely Reflective But Contemplative
The contemplative nature of the work by artist, sculptor, and de- signer Imran Mir (1914-2014) offers insight into how physics and the sonic are dynamically related. Much like theoretical essays or theses, his work elaborates on mathematics in general, and geometry in particular. Yet, for Mir, practicing art was suste- nance, a getaway from the demands of daily life.

The title of this exhibition is borrowed from an essay written by Mir’s dear friend, the artist and critic Rasheed Araeen: “It seems Imran Mir is turning his back to this mirror-image in an attempt to create a world that is not entirely reflective but contemplative, so that what emerges from it transcends the earthly needs of the body and its pictorial representation.” - Rasheed Araeen, ‘Beyond the Narcissism of the Self’, 2014

The selection of large-scale works in these rooms show how paint as a material offered Mir the possibility to play with expressive forms—both their geometry and gestures. The recurrence of a rich vocabulary of lines, squares, circles, triangles, and the ways in which they are put in relation with each other, give his work a certain architectural, or sculptural quality. The selected paintings and installations express the wealth of Mir’s ideas, as well as provide insight into the trajectory and transformation from his first series of paintings to his latest works—with their complex geometrical forms that evoke abstract languages.

This exhibition is Mir’s first major survey in Europe. It sets out to echo his credo “What you see is what you see”, which expresses his refusal of a classical art historical reading of his work, inviting you instead to wander amongst his paintings—and to contemplate. 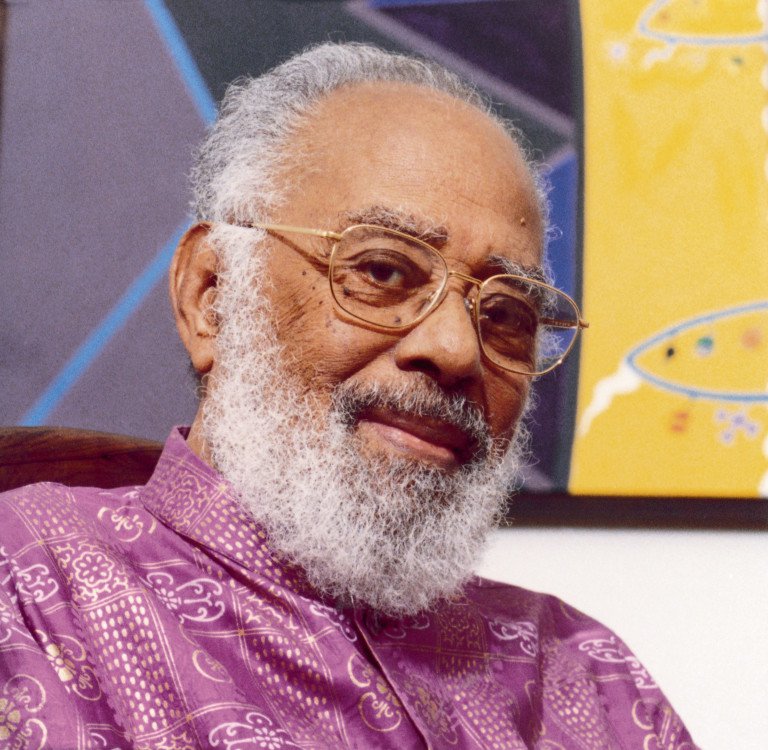 Abdias Nascimento, Being An Event Of Love
The life and work of writer, scholar, dramatist, artist, and activist Abdias Nascimento (1914-2011) is a testament to his active commitment to Black expression and solidarity, both artistically and politically. Above all, Nascimento was a Pan-African activist. He organized the National Convention of Brazilian Blacks (1946) and the 1st Congress of Brazilian Blacks four years later.

During the same period, he founded the Black Experimental Theater (1944) and the Black Arts Museum project (1950), both in Rio de Janeiro. While curating the latter, he began to develop his own creative work.

In his art, Nascimento found another space for his research into the historiographies, political concerns, epistemologies, and teleologies of African peoples, both on the continent and in the diasporas. In his painting practice, which spans over four decades, he uses myths, concepts, and aphorisms from ancient Egypt, the Yoruba’s, and the Ashanti’s. Together, his body of work can be seen as a compendium of aesthetic, philosophical, and political discourses on Blackness and resistance, and resistance in Blackness. This presentation of Nascimento’s work is structured into five chapters and trajectories that flow through his oeuvre: Activism, Passage, Sexuality, Symbolism/Semiology, and Theogony. In terms of style, his paintings defy categorization as either figuration or abstraction, as the gods, the human, the geometric structures, the spiritualities, and cosmogonies that he depicts, or evokes, transcend any effort to categorize.

From 1968 to 1982, he was in exile from the military regime in Brazil. During this period he exhibited widely in among others the U.S., where he also held several academic positions, such as Professor of African Cultures at the State University of New York. Upon his return from exile he founded the Afro-Brazilian Studies and Research Institute (IPEAFRO), which organized the 3rd Congress of Black Culture in the Americas (1982). Nascimento received national and international honors for his work, including the United Nations’ Human Rights Prize and UNESCO’s special Toussaint Louverture Award, granted to him and to poet, author, and politician Aimé Césaire in 2004 for their contribution to the global anti-racism movement.

Contextualisation Room
For the wandering spirits, in the middle of the exhibition’s circuit Abstracting Parables offers a Contextualisation Room. Here artistic fragments of the three artists are interlinked, to show how they are connected through overarching themes such as resistance, cosmos, and sound. Also situated here is Parasite Radio, sonsbeek20➜24’s broadcasting program in the (digital) ether.

Functioning as a mixtape, the exhibition includes a sonic route that gently guides you through and animates the worlds of Hémon, Nascimento, and Mir. With contributions by friends, family members, and artists— voices that keep the memory and practice of these artists alive today.

The exhibition is framed within the quadrennial sonsbeek20➜24 “Force Times Distance: On Labour and Its Sonic Ecologies”, Arnhem, the Netherlands. Abstracting Parables is a joint partnership between Stedelijk Museum Amsterdam and Stichting Sonsbeek.

The exhibition is developed in partnership with the Sedje Hémon Foundation, Afro-Brazilian Studies and Research Institute (IPEAFRO), and the Imran Mir Art Foundation. 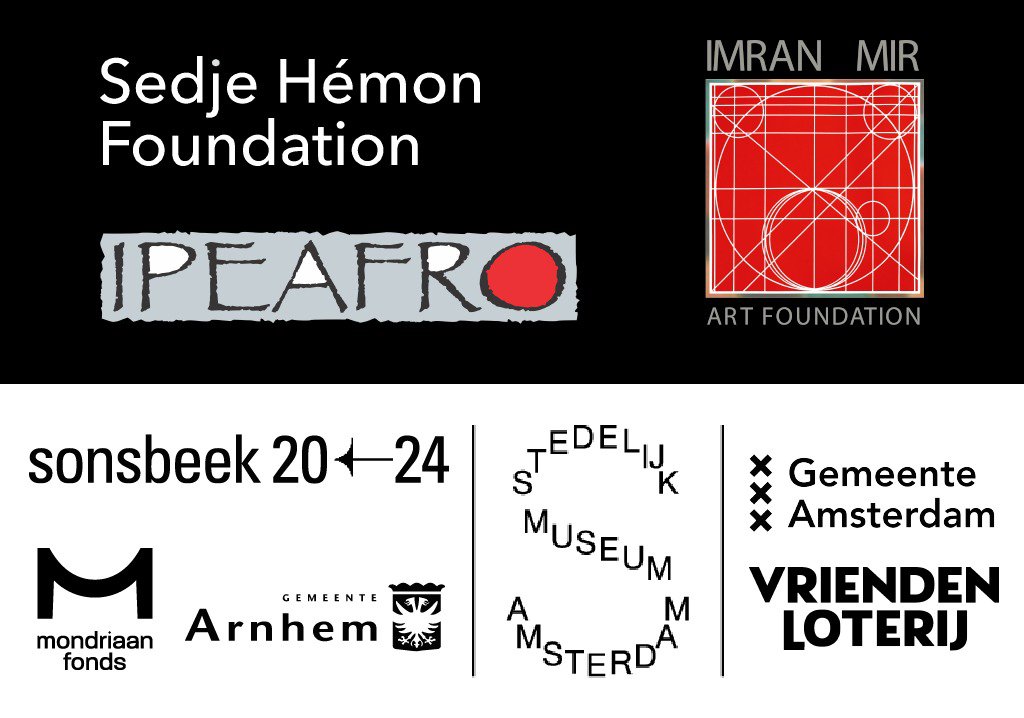